The Good and the Bad from the Los Angeles Rams Final Preseason Game Against the Cincinnati Bengals; From LA Rams Up 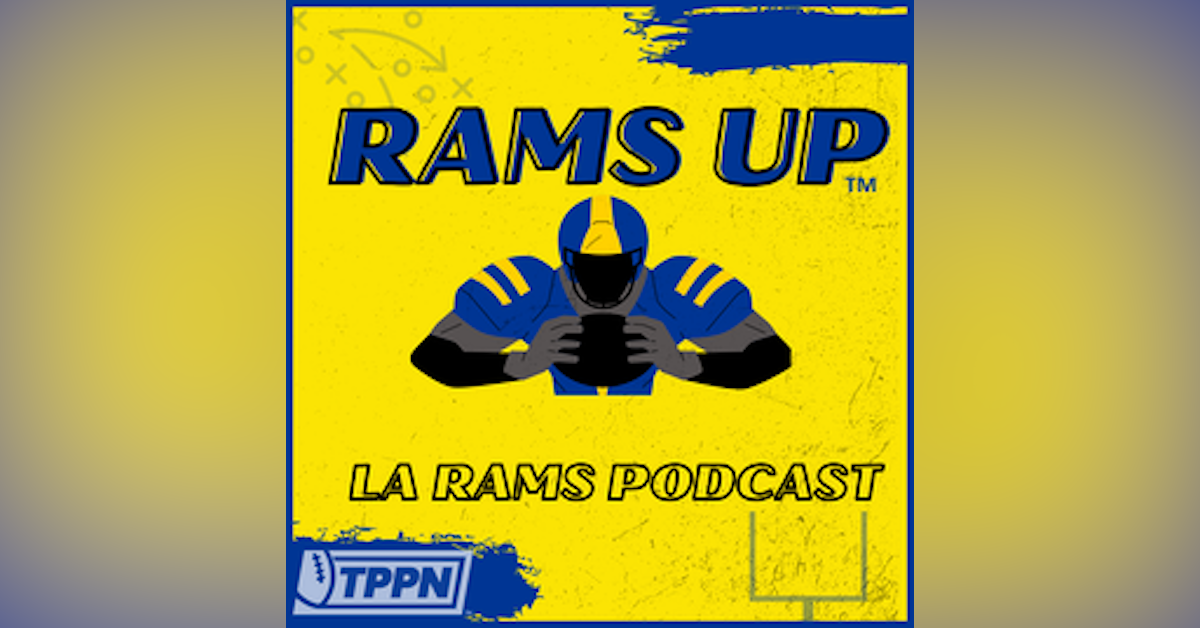 Welcome to Rams up, a Los Angeles Rams podcast. We are a proud member of the Pigskin podcast network. We cover other SoCal Sports News of interest, but we're mostly about your Los Angeles Rams. I'm your host, mark, let's get to it.

Welcome back ramfan. Season 2 episode 33 of Rams up and thank goodness the preseason is over. Now we can get onto the real thing. Rams bills that Thursday night opener wanted to give you a final wrap up.

On that third preseason game, DAT, 16 to 7 lost to the Bengals in Cincinnati.

We did a quick drop on our YouTube channel last night reviewing this game.

Get into a little more detail here.

I'm going to go through the defense first.

And give you some feedback.

Tell you what I saw.

Start with a defensive line.

Two guys I think are going to make this team.

Jonah Williams and Michael Hoyt came up with that sack.

Bit of a covered sack, but hey, he got to the quarterback, that's his job and he was a significant contributor last year, so I think he's in.

Williams looked like a first Stringer, surrounded by a bunch of second stringers, played really well.

He was a bit of a beast in there actually, so as I said last week, I think he makes his team.

On the edge, some interesting developments.

I'm starting to wonder if he's a one trick pony.

We only got to see him very briefly this preseason.

Last preseason he was incredible.

This preseason finally got on the field against the Bengals and he looks very light, especially compared to Keir Thomas and Benton Whitley.

You know he got that one pressure other than that.

Not much to see to be honest with you.

And back to my one trick Pony comment is he's someone that can just get around the edge and get to the quarterback on occasion and doesn't bring much else.

Is that all he has?

Meanwhile, care Tom is in Benton Whitley really tearing it up.

And shout out to Mina Kimes before the game.

She said her player to watch was Keir Thomas.

So good call by Mina, she nailed that one.

Thomas may have done enough in this game to make the team.

Now I don't know what's going on in practice.

Supposedly the Rams make a lot of their decisions based on practice and intersquad.

Scrimmages, more than they do the preseason games, but based on what I saw, my eyes tell me Keir Thomas is actually going to make this team.

Benton Whitley, I think he's destined for the practice squad.

Daniel Hardy will not be on his 53 man roster at the start of the season apparently, but I don't know.

Keir Thomas is my #4 guy off the edge right now. After Leonard Floyd, Justin Hollins and Terrell Lewis, inside linebacker. Clearly we have Bobby Wagner and Ernest Jones leading the pack. Christian.

Roseboom hasn't played a down all preseason, so.

That indicates he's on this roster.

Last week I was leaning towards Jake Gervase because of his flexibility, his ability to potentially play safety.

You know, second thought on that is we're not going to need him to play safety, right?

It'll never come to that.

And meanwhile, Jake Hummel, looking really good, said a preseason record for the Rams with tackles all over the field.

I think he still struggles in space, but.

I may put Hummel.

Ahead of Travis at this point.

Not even sure they're going to carry 4 linebackers.

They probably will right now.

I'd call it humble, backtracking on my call last week.

In the secondary, the only thing to really discuss there, aside from Kendrick and Durant, Durant struggled a little bit, got beat on that double move by an experienced in speeding Mike Thomas.

Don't over think that Durant is going to be a good player.

Has some things to work on, obviously.

He's on this roster for sure.

Of cornerbacks, perhaps, but the safety position, you know, Trell Burgess, andresy E The thing is, yeast will make it to the practice squad.

Made a couple key tackles and yeast.

He missed that one tackle.

That Passover the middle came up and made the hit to not make the tackle, though, and that's his number one job, right?

And he struggled in coverage a couple times.

So I'm going with Burgess over used at this point.

And to me it's pretty obvious based on the preseason performances anyways, not necessarily what's happening in camp.

That's my take on the defense.

Back in a second for my run at the offense.

Football fans, the next generation of fantasy football is here with Rainmaker football, the first ever NF fantasy game from DraftKings.

Craft lineups of athletes from your NF collection and earn points for touchdowns, receptions and more just like daily fantasy football.

The next generation of fantasy football is here.

Then click the rainmaker tile and opt in to get your first card free.

Plus play for millions in prizes all football season while building the ultimate NF fantasy.

Why void where prohibited? See draftkings.com for details.

On to the offense.

What players stood out in a good or bad way in this Bengals preseason game?

Let's start with the offensive line and I'm going to tell you I did exactly what I told you I was going to do.

Actually, I focused exclusively on AJ or Curry.

Trevor Ankrum and Eleric Jackson are both the backups on this roster after the starting five.

They'll keep an additional player for sure, possibly 2, and I'm hoping someone steps up.

And based on what Andrew Whitworth said last week, our Curry is a guy that rents have been pleased with.

So I took interworks advice and.

I watched AJ or Curry and he gave up a sack, got beat by a speed rush around the edge.

But other than that, you know, I think he won almost every one of his blocks.

He got out on a screen pass that got blown up because someone else missed a block, but he looks like an NFL tackle and he can play.

Tackle and guard, so I think a Curry is in.

I'm not going to get into anything else along the offensive line because I really haven't had time overall.

They obviously are not doing well in the run blocking department, so I'm not sure who else makes us roster besides the starting five.

And are Curry, Jackson and Ankrum?

He's a guy that I penciled in last week.

I'll stick with that for now, I guess, because I don't think anyone else has really done anything to stand out.

And that's all I have to say about the offensive line at.

I don't know if anyone that played last night it's going to make this roster.

I know, I know Roger Carter has some attractive qualities, but I don't think he makes us roster unless you want to cut loose someone like Jacob Harris, the wide receiver group, so that everybody wants to talk about, right?

Lance McCutcheon getting it done.

He's on this roster, right?

There's no way they're going to try to get him through the waiver wire and onto their practice squad.

'cause, it will not happen, and I think Jacob Harris makes his team.

You know, he's not really standing out.

I think Perkins is just looking for Mccutchen at this.

But I think it's Mccutchen and Harris both making this team.

Could be wrong on that.

Maybe Harris could make it to the practice squad.

That'd be kind of risky if the Rams really like him for his special teams contributions.

I know that's one.

The edge on Mccutchen.

Kyren Williams didn't play, but the Rams clearly love him and they're just putting him on the shelf for the regular season, so even though we haven't seen him.

Must be something good going on on the practice fields, and McVay said as much.

Sam Williams has earned it now.

Jake Funk, you know, great special teams player. Has he ever gained more than 3 1/2 yards on a carry? I think Dre Ragus performed better, really pushing the pile.

Finding holes that seemingly aren't there.

I mean, it's really painful for me to say this, but there's gotta be 15 or 20 better running backs and Jake funk on the market right now.

If you just want a special teams guy, have at it.

But I think his job might be at risk because of all these good young receivers they have that they'd rather keep.

But do you go with just three running backs?

John Wolford unable to play draw up his thumbnail?

So it was all Bryce Perkins.

And all of you guys only RAM fans that are just having this lovefest over Bryce Perkins?

He does some cool things with the ball in his hands.

But I just don't think he's a great passer.

They're going to keep him.

He's going to be on this roster.

The best quarterback on the field last night was actually Jake Browning.

I'd love to have that guy as my second or third quarterback.

Small data sample I know might not know what I'm talking about with regards to Jake Browning, but also I can tell you is that's the type of quarterback.

Just throwing darts, scrambling a little bit when you need it to.

Really liked what he did and look at.

Bryce Perkins is a great emergency quarterback in some situations, probably especially in the red zone, the things he can do with his feet.

But this team would be in trouble if he's taking the helm for a four.

Still, take John Wolford over Perkins in that situation, and I might take Jake Browning over both of them now.

Our schedule is all screwed up because there's so much happening.

Going to have cuts coming up here.

It may have already been some cuts by the time you hear this, so look for another drop pretty soon.

That's going to do it for this episode.

Remember, you can reach us at Rams up podcast at Gmail com.

You can visit our website at ramsup.com. You'll find links to all of our episodes and a link to our YouTube channel.

And you can also see this, uh, voicemail from our website.

Don't forget to subscribe and give us a 5 star rating.

Number keep the horns up, stay safe and have fun out there.